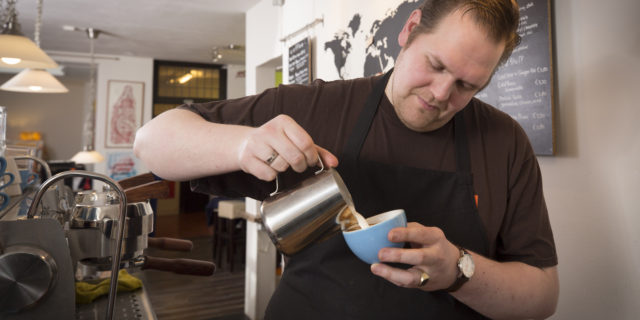 Nano Challa cooperative was established in 2004 by an initial 25 farmer members from the Agaro town in the Jimma Zone, Oromia, Western Ethiopia.The founder members formed the group in order to foster unity and to share in addressing issues they were facing around finding good buyers for their coffee, alleviating debt and improving standards of production.

Jimma is an area that had become synonymous with ‘Jimma 5’ –  low quality natural processed commercial type coffee that fetches minimal prices on the internal and international market. The name Nano Challa in Oromifa means “the area above”, a reference to their prime coffee growing location at high altitudes, benefiting from beautiful natural forest and rich organic soils.

Nano Challa’s fortunes were boosted in 2010, when they were chosen to be part of the Technoserve Coffee Initiative alongside other remote farming communities in Jimma, which was funded by the Bill and Melinda Gates Foundation. Technoserve provided technical assistance and training to producer groups, and helps coordinate agronomists and business advisors to help improve coffee quality, assist in the management of debt, reinvestment and the fair distribution of funds to each coop member. The impact of the initiative was huge, as it helped coops like Nano Challa transition from natural processing to washed, via the building of washing stations. In fact, Nano Challa was one of the first washing stations to be built in the area under the guidance of Technoserve, along with Yukro and Duromina.

Since 2010, Nano Challa’s membership has risen to over 400 and the quality improvements initiated alongside Technoserve have seen the coop’s coffees become some of the finest, most sough after in the whole of the country. This has led to radically improving the livelihoods of farmers and their families in the region.

Farmer members cultivate coffees at altitudes between 1850 and 2100 metres, and have around 3 hectares of land each, on average. As is the case across Ethiopia, most of the coffees grown locally are organic by default, and consist mostly of old, naturally indigenous heirloom varieties, punctuated by smaller areas of an improved native varietal called 1274. Once producers deliver coffee to the washing station, cherries are floated before being de-pulped using a Penagos Eco Pulper. The coffee is then soaked in clean water in concrete tanks for 8 hours before drying; firstly skin-dried and sorted under shade, before being sun dried for approximately 10 days on raised African drying beds.

Part of Nano Challa’s strength lies in being part of the Kata Muduga Multipurpose Farmer’s Cooperative Union – an overarching organisation that includes some of the best known, highest quality producing washing stations in the country. Kata Muduga’s general manager, Asnake Nigat, was a business advisor for Technoserve prior to joining the Union, ensuring that the recent history of cooperatives like Nano Challa continues on a farmer-focused path.