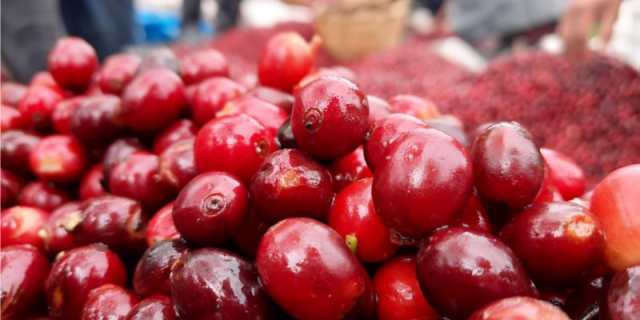 We have bought several new coffees from Costa Rica. Falcon Coffee truly delivers with this Natural lot. We usually get Costa Rica earlier in the season but due to Covid deliveries were more delayed than ever. Edgar Fallas Solis takes regular Brix measurement making sure the coffee cherries ripen properly. Expect notes of apricot, red grape and chocolate.

San Francisco is the name of a district in the Cordillera Central, also called La Zona de Los Santos, but it is also the name of the farm owned and run by Edgar Fallas Solis, his wife Ligia and their son Willian. Edgar is the second generation of his family to work on this 55-year-old farm and Willian, his son, will take over when he retires. The family owns 10-12 hectares of coffee, intercropped with avocados, citrus and banana trees. The original coffee variety grown was Caturra, but Catuai and Catimore varieties have been added – the family get their seedlings from ICAFE, the national coffee research centre. The farm is split into parcels, positioned from 1,400 to 2,000masl, with the coffees for the microlots grown at 1,800+ masl.

Protecting the environment is important to Edgar – he is aware of the potential impact of climate change and the necessity to adapt his practices. He uses biodynamic techniques – intercropping, and the use of garlic and chilli to deter pests – and he plans to increase the ratio of organic to chemical fertilization from its present 50:50 to 75:25.

The content of the sugar in the cherries is monitored by the family using a Brix meter. When the meter reads between 21 and 28 (depending on the variety), the cherries are harvested. At the peak of the season, 15 people work with the family to harvest the coffee.

Edgar and his family are members of Asoproaaa Coop, which counts more than 1,000 members, of which 300 are coffee producers. It offers financial and commercial help to members, distributing $1million for coffee, $1million for citruses, $1million for cattle and $1million for all entrepreneurship projects (which can be linked to coffee), as well as providing producers with access to credit. The association also runs a housing programme, with over 1,400 houses built for those most in need in the community.

The average size of the members’ farms is 5ha for a production of 50 quintales (1 quintal = approximately 46kg green beans) per ha. Varieties grown are mainly Caturra and Red and Yellow Catuai, but also some Typica and Geisha. The area produces a lot of coffee, but the association only buys microlots. This is because its strategy is to produce only high-quality specialty lots, but also because its present capacity is only 500 exportable bags or 1,000 fanegas (1 fanega = 250kg of cherries/46kg green beans) per year. The premises and machines (and staff) could not handle the whole production of all its members. They sell the lower grades to other buyers in the area.

Once the cherries have been delivered, Brix measurements are taken to help the team to make a decision on the process to apply. Patios and African (raised) beds are used. In 2020 they bought an extra 50 tables for honeys. The drying stops when the coffee reaches a stable 10.5% moisture content. The lower grades are separated off after green sorting and are roasted and packaged on site to be sold to the local market. The dry milling is done on site and bags leave the warehouse only when ready for export. We have noticed an increase in quality every year that we have been working with the association.